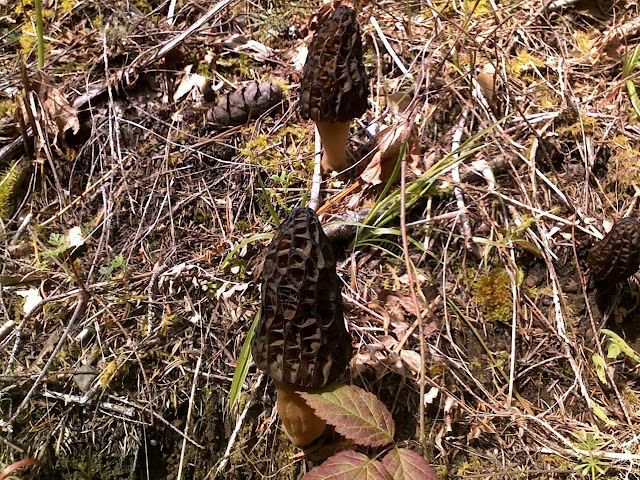 Being that it's that time of year, and almost all of these myths are being brought up, ad nauseum, here's a little myth busting post to help y'all work it all out.

Myth:  Morels just appear, full-sized and fully formed, out of the ground.

-- Truth: Morels, just like everything else on the planet, start out small and grow to their final size.
Sometimes that size is large. Sometimes it is small. Sometimes they stunt before they reach full size, because environmental conditions are not conducive to much growth. However, they do, in fact, grow from primordia to full-sized mushrooms.
There are plenty of time-lapse videos to show that, and you can test it yourself, if you like.


Myth:  Morels have roots.
-- Truth: Like any other fungus, Morels are part of the Fungi kingdom, not Plantae. They are not plants, and do not have roots.
Roots are an organ specific to vascular plants, that allow water and nutrient uptake.
The organism that produces the mushrooms is a network of hyphae (long, thin strings of tissue) called a mycelium (plural, mycelia). It lives in the substrate in which the fungus grows, in the case of Morels, the soil.
This organism persists long after the mushrooms have been picked, and keeps producing more mushrooms, when conditions are right, for the duration of its life span, which could be decades, or even centuries.


Myth:  Pulling Morels kills the patch, because it takes away the (mythical) roots.
-- Truth: No. As we have already established that Morels have no roots, in the first place, and that the mycelium organism that produces them is persistent, this is patently false.
Beyond that, we have over 60 years of empirical data, from two separate and unrelated studies (The Chanterelle Project - Norvell, et al.; and a Swiss study, the results of which were published in a paper entitled "Mushroom picking does not impair future harvests - Results of a long-term study in Switzerland", Egli, et al.) on this topic.
Both studies, independently, arrived at similar results. Those results show that harvest method has very little impact on future sporocarp production. Whether you pull, pinch, cut, twist, bite, golf-swing, toe-grip, or whatever - you're not harming the mycelia. They will produce as many sporocarps as environmental conditions allow.


Myth:  Morels have deadly look-alikes
-- Truth: While "look-alike" is a fairly subjective term, Gyromitra spp. (that is, species pluralis - and easy way to refer to all species within a genus) really look very little like Morels, and most species are actually quite edible, needing only thorough cooking to mitigate the gyromitrin (hydrazine toxin) within them.
Verpa spp. Verpa spp, on the other hand, CAN look very similar to Morels, and no analyses performed on them has shown any gyromitrin or any other hydrazine toxin. They are as edible as Morchella spp., requiring only thorough cooking.


Myth:  Morels pull back into the ground to escape being picked and at night.
-- Truth: Morels do not shrink back into the ground. It's quite easy to verify this, yourself, by carefully excavating the soil from around the base of the Morel. You'll note that there is no cavity into which it could shrink, and there is no motile tissue in the Morel to facilitate such action. They only get bigger - not smaller.

Myth:  Half-free Morels are not Morels and will make you sick.
-- Truth: Morchella punctipes and Morchella populiphila are two of the three species that are often called, "Half-free" Morels, due to the fact that their cap attaches partway up the cap, leaving a large, overhanging "skirt". (The third species is Morchella semilibera, which is a European species.)
These are often confused with Verpa bohemica; but, are morphologically easy to differentiate. I wrote an entire post on this, and in a Morel group, you can probably search my name to find it. It details how to tell the two genera apart, pretty well, and which characteristics to look for.

Myth:  Morels don't grow - they just dry up.
-- Truth: See the first myth. All things grow. If conditions are not conducive to growth, they may not do so, but under good conditions that one-step-away-from-primordium Morel which you posed next to a dime for size comparison will grow to a full-sized Morel.


Myth:  Morels grow faster because of thunder.
-- Truth: There is no truth to this. Thunder is sound.
That said, however, there is evidence that a lightning strike can, in fact, improve fruiting for many species of mushrooms - Morels being no exception.
A tree that suffered lightning damage stands a good chance of producing a bumper crop. But they really don't care about the thunder that the lightning produced.


Myth:  Morels are not toxic.
-- Truth: Morels may, or may not, be toxic. No toxin has ever been identified in them. HOWEVER, they should always be treated as if they contain a thermolabile neurotoxin, as they have been linked to numerous toxic events, most of which share similar symptoms. Those symptoms include loss of motor control, confusion, sneezing, and profuse sweating, among others.
This indicates that they most probably DO contain some sort of toxin, we just don't know what - and we do know that thorough cooking prevents them from causing toxic symptoms. Verpa should also be considered to carry the same toxin, and treated like Morels before consumption.


Myth:  Mesh bags spread spores and if you don't carry your Morels in mesh bags, you are killing them all.
-- Truth: The truth of the matter is that there are no data that confirm, or refute, any human effect on spore distribution, especially amongst Ascomycetes, such as Morels.
By the time that you pick a mature Morel, it has already released most of its spores. The mechanism by which they produce, and release spores often causes the majority of spores to disperse in a few puffs (yes - the technical term is "puffing") and any disturbance to the sporocarp can trigger puffing.
So, by the time that you have found, cleared, and picked the mushroom, it's released the vast majority of the spores that it contains - if it's mature.
Immature mushrooms do not release spores, as they are not ready to do so. If placed in a dehydrator or similarly dried, they will expel the spores - the environment forces this. Those spores may not be viable, however, and won't grow into any new mycelia.

Myth:  You have to cut them in half to make sure that they are safe. If they are hollow, they are safe.
-- Truth: Not really. The only things that look close enough to a Morel to warrant this sort of invasive technique would be Verpa bohemica, and Phallaceae, such as Phallus hadriani. Both of which are generally easy to distinguish from Morchella spp. based on external morphology.


Myth:  There are only three kinds of Morels - black, grey, and yellow.
-- Truth: In actuality, there are nearly 70 known species of Morels in the world. Around 30 are endemic to North America. They form three sections within the genus: Rufobrunnea, Morchella, and Distantes, with a number of species still unresolved.
So, there are a whole lot more than three.


Myth:  "Grey" Morels.
-- Truth: Thus far, all genetic analysis has shown "grey" Morels to be in the Morchella section - the "yellow" Morels. They mature and yellow out, generally, though some large specimens have been seen to look grey.

Myth:  Morels are mycorrhizal
-- Truth: In fact, we don't know exactly HOW Morels relate to plant species. We know that, at least part of the time, they are saprobes - feeding on the dead tissue of the trees and plants around them. Their affinity for certain species, however, indicates that there is a complex relationship between certain plant species and certain Morchella species. While they have never been shown to form mycorrhizae (a structure that allows the fungi to interact with the plant) on tree roots, there is undoubtedly some connection that we do not, yet, fully understand.


Myth:  Morels have to be soaked in salt water.
-- Truth: Hey, if it floats your boat, go ahead, but insects and dirt can generally be brushed off easily enough. Larvae aren't going to totally vacate - they'll just drown, and you'll be eating dead, brined larvae (tiny bacons). Tiny bacons never hurt anyone, though.
But a long soak in salt water does damage the structure of the mushroom and the flavor and texture are generally better from a brushed, or slightly washed, mushroom than a soaked one.
There is a reason that no chef would buy soaked Morels.


Myth:  Cup fungi mean that Morels will be there tomorrow.
-- Truth: Some "cup" fungi to, in fact, inhabit the same areas as Morchella, and fruit before them; however, it's not really a great rule-of-thumb to think that just because you saw Peziza or Urnula species, Morels will follow.


Myth:  "False" Morels will all kill you.
-- Truth: Really this has already been covered, earlier. However, to recap - Gyromitra spp. are generally edible after a thorough cooking process (with the exception of a few species). Verpa spp. are as edible as Morels - again needing a thorough cooking, as do Morels. Helvella spp., if you decide to eat them, should be treated as the edible Gyromitra.


Myth:  Don't eat Morels and drink alcohol.
-- Truth: Morels do not contain any toxins that interact with alcohol, in our experience. While some toxic events that implicated Morchella spp. ALSO involved alcohol, the majority did not, and the symptoms were the same.
The only mushrooms, that we know of, which are contraindicated with alcohol consumption, are those species which contain coprine, such as Coprinopsis atramentaria.


Myth:  Raw Morels are safe to eat.
-- Truth: This is not true. As discussed earlier, Morchella spp., must be presumed toxic when raw, as they are implicated in a large number of toxic events. Always cook Morels. Yes, you might eat one raw and suffer no symptoms, but sola dosis facit venenum (“only the dose makes the poison"), and we do not know the toxins presumed to be in Morels, so have no idea how much is needed to cause symptoms.


I think that about covers all of the Morel myths that I, and some peers that I consulted, could come up with. Please feel free to let me know of any that I've missed!


Check out the False Morels Demystified Facebook group for some good information, or many of the actual mushroom identification/discussion groups there.
Posted by Matthew J. L Kilger at 11:18